This bill amends the Internal Revenue Code to: (1) eliminate the $200 transfer tax on firearm silencers, and (2) treat any person who acquires or possesses a firearm silencer as meeting any registration or licensing requirements of the National Firearms Act with respect to such silencer. Any person who pays a transfer tax on a silencer after October 22, 2015, may receive a refund of such tax.

There are a lot of negative and uneducated reactions to this bill. In this article, I hope to clear some of that up with test data, research information, and my humble opinion. This article is not aimed at discussing the actual bill but is more about gun noise and what a suppressor can do to protect hearing. The hearing of everyone is important and hunters use that sense on every hunt. This is why it is important to make gun suppressors an easier option for law abiding citizens.

I think the biggest issue is that the opposed side of an argument seems to focus too much on terminology…..in this case: silencer. The terminology “gun silencer” and “gun suppressor” is used interchangeably, when in fact, a gun suppressor only suppresses the sound and does not make it silent.

One misconception is that a gun silencer actually makes a gun shot silent. This is not the movies! Ignore the term “Silencer” and think of or use the term “Suppressor”. While gun silencers do reduce the noise to a safer level (the point of this bill) they do not make the gun silent. On average silencers only suppress the sound by 20 to 35 decibels.

Another misconception is that making it easier for people to obtain silencers will increase criminal activity because if a shot is fired, it would not be possible to hear it. To begin with, criminals are not in the business of following laws. If they wanted a silencer, they would get one whether it was legally or illegally obtained. Also, a silencer would actually be more inconvenient to a criminal, since it extends the gun by quite a few inches (6 to 12 inches, or more). Lastly, unless criminals are interested in protecting their hearing, a gun silencer would not be an asset to the criminal activity because as mentioned they only reduce the sound not make the guns report silent.

Just as the implication that a gun silencer offers a criminal to remain more inconspicuous, the same argument could be made to add tax to all knives shorter than 6 inches because they can’t be seen as well as 12-inch knives. Or, as an even more ridiculous scenario, perhaps a tax should be added to vehicles with automobile mufflers since it would allow criminals to flee the scene silently.

Hearing issues from gunfire became a real issue for me as of November 2016. During my typical scope check before hunting season last year, the sound got trapped by a building and trees and created a ringing in my right ear. I have had this ringing before, but not like this. After months it has not gone away and with some simple research, I found that it’s called Tinnitus and in most cases is permanent.

One thing about Tinnitus, at least from my current experience, is that it is extremely annoying. I notice it even more in quiet settings, like while hunting, when I am trying to relax but have this non-stop ringing in my ear. I do consider myself lucky since I can still hear out of that ear, which I am thankful for.

There are 2 types of wearable hearing protection.

Both of these are problematic and potentially unsafe while hunting. To start with, two of the five major senses are used while hunting: sight, and hearing. If your hearing is blocked you can not hear people or traffic that may be in the same area that you are hunting. Any safe hunter knows his or her surroundings, but those surroundings can change for many reasons throughout the day. Not being able to hear changes in one’s surroundings could put a hunter, or anyone nearby, at great risk.

Ear plugs only work to an extent on blast noise. They may be fine with industrial consistent noise, but not blast noise like from a large caliber gun. I was wearing ear plugs yesterday while doing my decibel tests, and shooting my 7mm Rem Mag still caused blast ringing in my ears. They simply were not effective at blocking that loud burst of sound.

The Reality Of Sound

Let us get down to some numbers.

The first thing to understand is that ambient sound always exists. In the location where I was doing decibel tests, I had around 45-50 decibels of ambient sound. This ambient noise is simply the wind, birds, trees, grass, and leaves of my surroundings.

Hearing damage can start at 85 dB.

If a sound reaches 85 dB or stronger, it can cause permanent damage to your hearing.

A typical conversation occurs at 60 dB – not loud enough to cause damage.

Some examples of typical noise:

Military jet aircraft take-off from an aircraft carrier with afterburner at 50 ft – (130 dB).

Arbitrary base of comparison: Decibles in the upper 70’s are annoyingly loud to some people.

There are several factors that make a difference in the noise a gun produces when firing, including:

For those that don’t know anything about ammo and guns here are some images that will help. This also happens to be the same ammo used for the sound tests in the table below. Keep in mind, there is a very large selection of calibers that get even bigger. This is just what is available to me at this time. 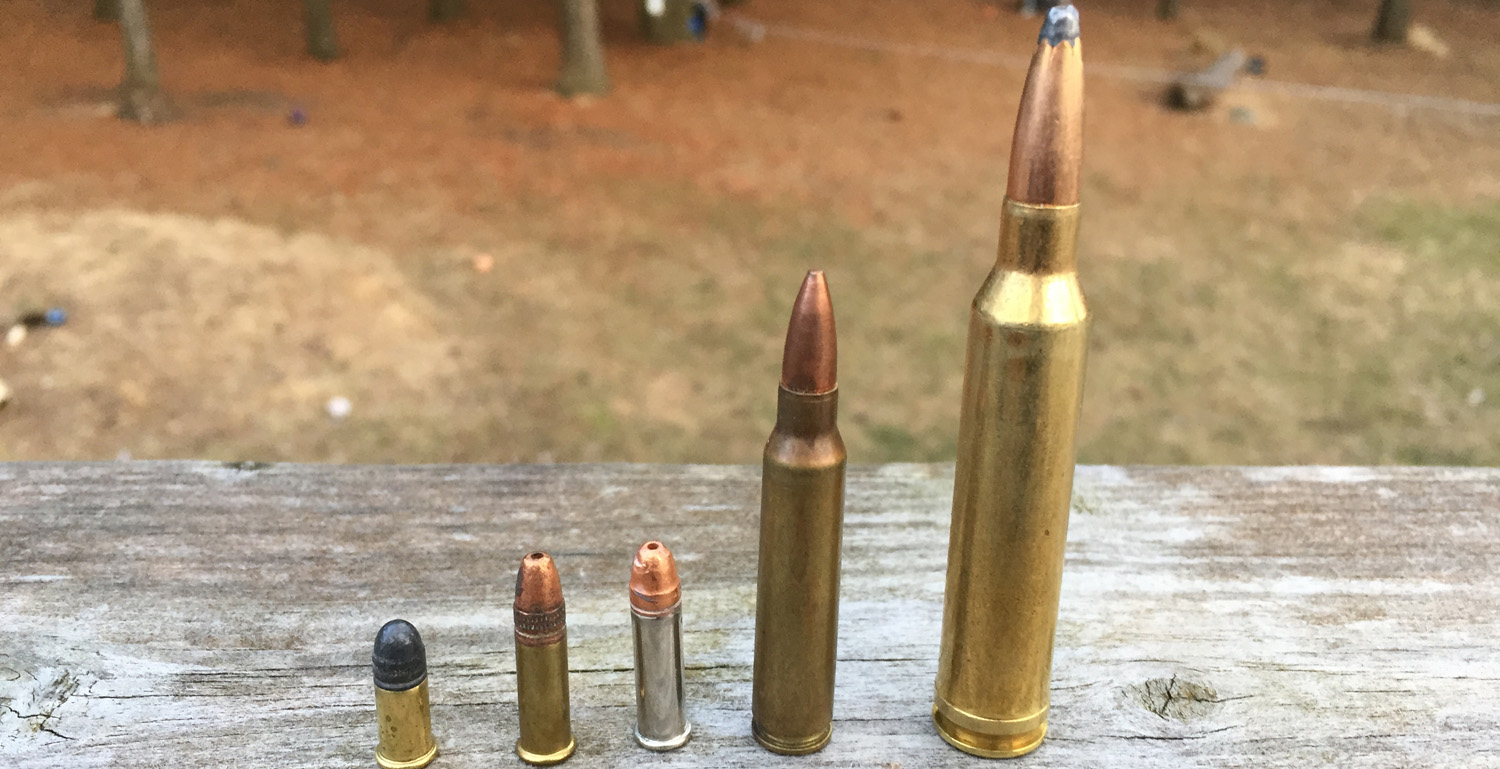 Just by looking at this image it is obvious that the smallest on the left will be the quietest and the magnum on the far right the loudest. The question is HOW loud? 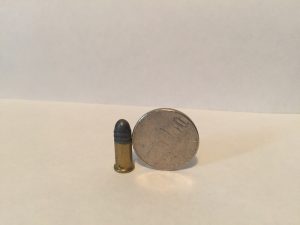 Here is a size comparison that everyone will understand. The following image is smallest on the left in the previous picture, the CCI Subsonic Short and it is standing by a US nickel.

Now what you need to understand is that this round is so small that it is pretty much useless other than short range plinking and dispatching small animals at point blank range.
As seen in the sound tests below, it is loud enough to cause permanent hearing damage.

On average silencers only suppress the sound by 20 to 35 decibels but that would be enough to bring the sound of the gun report into a manageable sound level.

NOTE: the decibel meter I used is just a basic meter but works good enough to provide some data to compare.
Recorded ambient noise 42 dB
None of these guns in the test are suppressed and this is an outdoor setting.

Most of these guns are not normal, as they all have extended heavy target barrels. As you can see from the numbers, barrel length makes a big difference. For instance, my 7mm Mag’s barrel is about 4″ longer than normal in the same caliber and the typical hunting rifle does not have a bull/heavy barrel which means mine is actually quieter than most. The same goes for the 223, the 22 rifle and the Ruger government target.

Also, all ammo was factory loads. Most people that reload will load their ammo hotter than factory, which makes them more accurate but also even louder yet.

You can take this bill for what it is – an option for shooters and hunters to have a more obvious option of hearing protection with suppressors without having to jump through hoops and pay an extra taxation. Another way to look at it is this: Why don’t we remove all mufflers from automobiles and tell people that don’t like it to just where ear plugs? Not an option, right? Then why should legal gun owners not have a more acceptable way to quiet a gun down to protect the hearing of themselves and others?